The story of the Bears Cave

The Bear Cave is located in Chiscau, in Bihor County and is one of the local attractions of the Apuseni Mountains. It was accidentally discovered on September 17, 1975, during local mining (the entrance was discovered during an explosion). The first miner to descend into the cave was Traian Curta, who walked through the gallery and reached the Great Hall of the cave.

The cave got its name from manny cave bear skeletons that were found intact. Across Europe, there were found only 4 cave bear preserved skeletons. The cave was a refuge for these animals 15,000 years ago. The many cemeteries discovered in Romanian caves (Bisericuța Cave, Bone Cave) confirm the fact that the cave bear, like many other mammals, retreated to the same place to die as its predecessors.

The first excavation of the cave took place on September 20, 1975, and was carried out by the amateur cave research team “Speodava” of the town of Stei. The “Emil Rachoviță” Cave Research Institute, in cooperation with the Ţara Crişurilor Museum in Oradea, carried out excavations and complex investigations. In the years following the discovery, the cave was made more accessible by the installation of sidewalks, stairs and railings. The cave was opened to visitors on July 14, 1980, 5 years later. The cave is visited by more than 200,000 tourists a year.

The Bear Cave was formed in Triassic limestone about 200 million years ago. There are many stalactite formations formed in the limestone by water seeping through the cave. A lot of cave bear sketeltons have been found here, including an intact skeleton that is still in its original location to this day. The many skeletal remains can be explained by the fact that the entrance to the cave collapsed and so the bears were starved to death. The cave is about 1,500 m, which consists of several levels. The lower level is about 700 m and is sometimes crossed by water. This section is not accessible and is classified as a science reserve. The upper level is 847 m, it is built and can be visited with a guide.

The accessible section of the cave consists of 3 galleries:

The following figure shows how the galleries are arranged:

Inside the cave, the temperature is constant throughout the year, at around 10 ° C, and the humidity is 97%.

The cave can be visited from Tuesday to Sunday from 10 am to 5 pm. The duration of the visit is about 45 minutes and you can enter the cave with a group of at least 3 people, accompanied by a guide. The entrance fee is 30 lei/adult and 15 lei/child. For organized groups, tou can get 1 free ticket for every 10 people. There are currently no fees for taking photos/videos.

How do you get to the Bear Cave?

The entrance is from the E79 highway from Sudrigiu. From here, take the 763 country road to Chiscau. 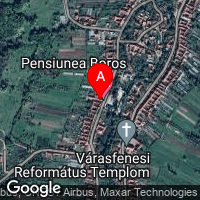